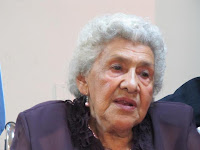 At noon on Friday, September 21, 2012 passed from this life Joaquina Vanegas Arroyo, burdened by diabetes that caused the loss of one leg and other related health issues, she is at rest now. Granddaughter of don Antonio Vanegas Arroyo, who collaborated for 22 years with famed artist Jose Guadalupe Posada; beloved sister of Irma and reknowned lucha libre star brother, Arsacio, who together formed a partnership with Fidel and Raul Castro, “Che” Guevara and the Cuban Revolution, just like them, she made history for all of Latin America. She will be missed by those who knew and loved her.
Posted by Director at 4:12 PM No comments: 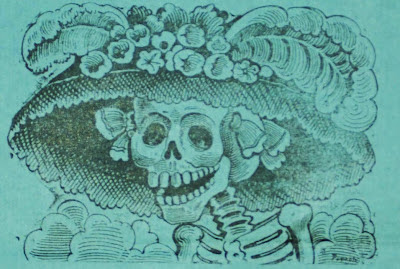 Perhaps the most famous image that Posada created seen here is known today as La Calavera Catrina, which is the feminine of the Catrin or male dandy. The current year of 2012 marks the 100th anniversary of her first appearance in the publications of Antonio Vanegas Arroyo. Posada never illustrated her in any form other than as she appears here. As far as we know she appeared first in November of 1912, a mere three months before Posada died in January of 1913. But the popular image has since been portrayed countless times in full length. This credit perhaps goes to Diego Rivera who created a full-length version La Catrina in honor of Posada in his mural at the Hotel del Prado in Mexico City.
Posted by Director at 12:32 PM No comments: 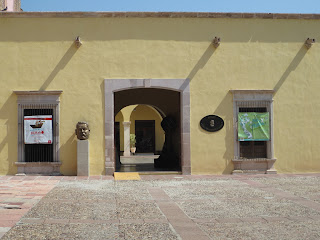 José Guadalupe Posada was born in Aguascalientes, Mexico in 1852. During the 61 years of his life until his death in 1913 he would great a legacy of artistic genius and ultimately become one of the most influencial artists in the history of Mexico let alone the world.

A visit to the museum and the beautiful state of Aguascalientes provides the visitor with an opportunity to see Posada's original engravings and hundreds of images made while in the employ of Antonio Vanegas Arroyo. It is a journey well worth the trip!

http://www.aguascalientes.gob.mx/temas/cultura/espacios/museos/m_posada.aspx
Posted by Director at 5:56 PM No comments: 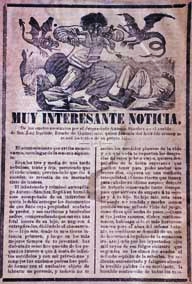 "Very Interesting News" reads the 1910 headline about the sensational story of Antonio Sanchez who goes berserk with an axe killing his parents, wife and infant son. He then eats his son! The image communicates the horror of the event in no uncertain terms. If Sanchez did devour his son, any question of what it might have looked like is resolved with this image. Although it is unsigned it was likely drawn by Posada and certainly approved by Antonio Vanegas Arroyo. We believe it serves as an excellent example of Vanegas Arroyo's sensational practices and also indicative of the collaborative nature of their relationship. Who directed the body parts with bodies strewn about, the bulging eyes and mad look of Sanchez? Then there is the baby being eaten, not chopped up into bits but eaten whole, perhaps while alive! The shear grotesque look and terror of the image helps to reinforce the moralistic aspects of the story line, which ultimately is warning the reader not to gamble. Sanchez loses all he has gambling and when his father refuses to pay his debt, the tragedy ensues. Eventually Sanchez is apprehended, tried, convicted and put to death. His body is then destroyed by natural elements. It seems justice must be served. Posada throws in some diablitios "little devils" perhaps to show how the devil is around to lead us astray. There are many examples of such sensational images in Posada and Vanegas Arroyo's collaborative work. In Posada's day images could be constructed to portray events or emphasize certain points. Now days we have color photographs and film, digital and immediate appearing via Internet or satellite broadcast but the fundamental sensational elements used by Vanegas Arroyo and Posada are the same that we use today.
Posted by Director at 7:20 PM No comments: 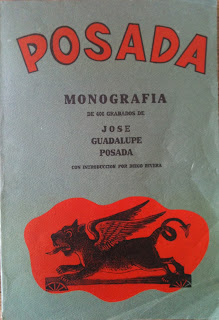 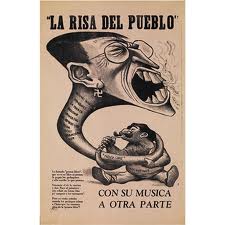 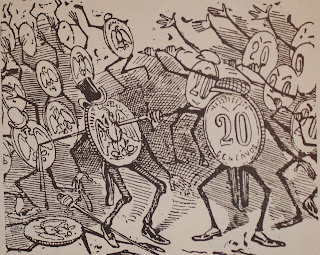 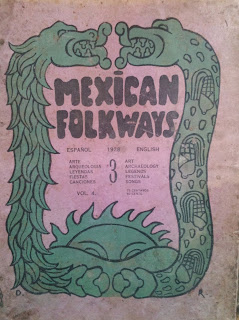 Pictured here is the front cover of Mexican Folkways which was a Mexico City based magazine published from 1925-1937. The magazine was bi-lingual in Spanish and English. Its founder/publisher was Frances Toor(b.1890- d.1956), an American woman and anthropolgist who in 1922 came to study in Mexico City and essentially made Mexico her home. Diego Rivera, became the magazine's art editor in 1926 and in this 1928 edition we see cover art by Rivera but more importantly inside is the first significant article about Jose Guadalupe Posada. It is written by author Anita Brenner (b. 1905 - d. 1974), born in Aguascalientes, Mexico which was also the birthplace of Posada. The article appearing in this edition of Mexican Folkways would later be incorporated into Brenner's 1929 book, Idols Behind Altars. These publications set the stage for the first comprehesive collection of Posada's works, Monografia, that would be published in 1930 by Frances Toor and Mexican Folkways.
Posted by Director at 9:42 AM No comments:

The Earliest Reference to Posada and Vanegas Arroyo 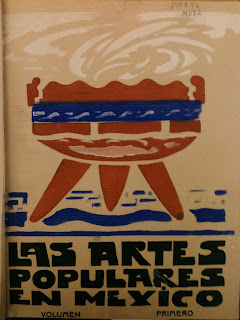 One of the first people to publish a reference about Jose Guadalupe Posada and Antonio Vanegas Arroyo was Mexican painter, printmaker, writer and some say also a volcanologist, Gerardo Murillo (Jalisco, Guadalajara, b. 1875 - d. 1964). He signed his works as "Dr. Atl" (atl = the Nahuatl word for water). Pictured here is the front cover to the two volume set of Los Artes Populares de Mexico published in 1922; five years after the death of Antonio Vanegas Arroyo and nine years after the death of Posada. In the second volume Dr. Atl briefly reviews printmaking and aspects of literature such as songs, religious works and what might be called "tabloid-like" publications of Mexico. The publishing house of Vanegas Arroyo is discussed and grabador "Guadalupe Posadas" is very briefly mentioned; significantly, the printing house is described as one of the leading printing establishments of it kind and for the time. A variety of Posada's images are pictured in the volume, some of the engravings/etchings are signed by Posada and some unassigned images are also reproduced.
Posted by Director at 4:31 PM No comments: 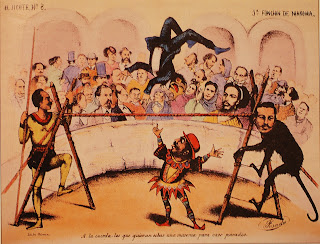 Jose Guadalupe Posada (at nineteen years of age) created this image in 1871 for a weekly publication that featured satirical commentary called El Jicote "The Wasp". Here he depicts a circus-like arena composed of politicians. Politicians are in the audience and also holding the balance beam for the "balancing act" of the politician who is performing. In this image the politician could be flip flopping on policies or jumping to another party, regardless it is tricky act. It could easily have been published today using the faces of contemporary political candidates.
Posted by Director at 9:13 AM No comments: 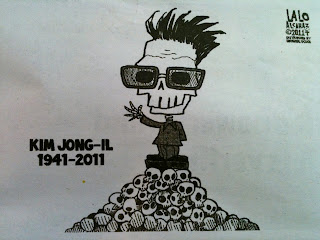 Mexican - American (Chicano) cartoonist/artist Lalo Alcaraz created this cartoon of the late North Korean leader Kim Jong-IL using calavera imagery that could easily have been rooted in the works of Jose Guadalupe Posada.
Posted by Director at 10:29 PM No comments: