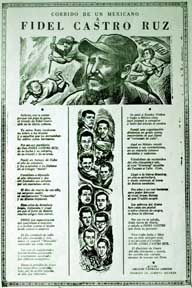 This broadside was published in 1959 by Arsacio Vanegas Arroyo (1922-2001), the grandson of publishing house founder Antonio Vanegas Arroyo and son of Blas. Arsacio was a professional wrestler and also a printer. He was the third Vanegas Arroyo to continue the family legacy of printing. What few people know is that he played an instrumental role in supporting the Cuban Revolution. The roots of this support may be traced back to his grandfather, father and Posada. Sympathies for those who struggled for human rights and independence are reflected in the publications of the Vanegas Arroyo printing house. The collaboration of Posada and Vanegas Arroyo paved the way for success of the printing house and eventually as Posada's name grew in stature thanks to Jean Charlot and Diego Rivera, Arsacio was placed in a position to be helpful to the Castro brothers. For over eight months the Castros and Che Guevara lived with the Vanegas Arroyo family. Arsacio trained them in hand to hand combat and physical conditioning. He printed the 1st and 2nd Manifestos written by Fidel Castro on the family press and also war bonds which were sold even in the USA to raise money for the revolution. The image in this broadside is by Alberto Beltran an accomplished artist who worked in association with the Taller Grafica de Popular.
Posted by Director at 2:15 PM No comments: 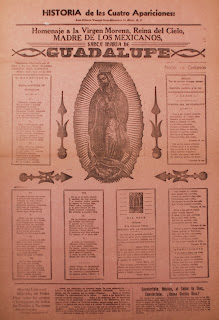 In this image attributed to Posada we are given the story of Santa Maria de Guadalupe and the four apparitions associated with her. Because the printing plates were reusable the Vanegas Arroyo printing house could seemingly issue new broadsides but with different text/type for occasions related to a particular saint or religious holiday. This was one way to keep costs down in the competitive market for their publications.
Posted by Director at 8:39 AM No comments: 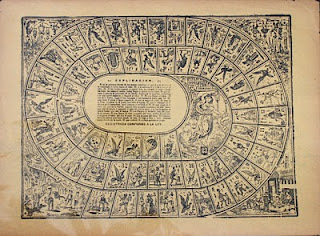 Posada illustrated at least a dozen gameboards for the Vanegas Arroyo printing house. This particular game called Juego de la Oca or Game of the Goose may have originated in Europe but as seen in this version is believed to have appeared in Mexico during the 1880s. There are 63 little boxes, dice were rolled and pieces advanced (and sometimes turned back) with the winning objective to be the first to land in the Garden of the Goose. The print of this gameboard was made with an acid etching and signed by Posada. It is still played in Mexico to this day.
Posted by Director at 7:10 PM No comments: 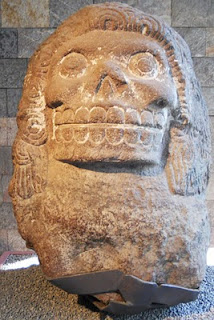 In this image of a stone carving from the Museo de Antropologie in Mexico City we see some of the historical evidence from which Posada gathered inspiration for his calaveras. Hundreds if not thousands of such examples exist but the interesting thing is that calavera images really did not become "popular" until Posada's illustrations of calaveras were put out into the world through the printing press of Antonio Vanegas Arroyo. Artist Jean Chalot drew attention to Posada beginning in the 1920s-1930s and today with the popularization of calavera images Posada is growing beyond Mexican roots and into the global sphere. Fortunately, the only papers Posada's calaveras need are the papers they are printed on!
Posted by Director at 9:42 AM No comments: