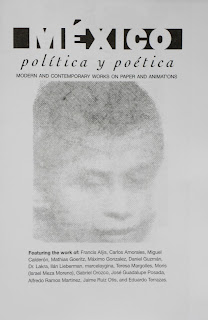 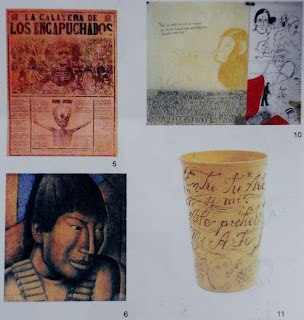 In 1937, the Taller de Gráfica Popular (or the "People's Graphic Workshop") was founded in Mexico by a group of artists led principally by Leopoldo Méndez (1902-1969), Pablo O'Higgins (1904-1983) and Luis Arenal (1908-1985). The “TGP” was a artists' collective concerned mainly with using art to advance social movements. The political activism that flowed from their collective energy influenced many collaborations in Mexico and abroad. Most scholars and the TGP artists themselves would agree that the works of Jose Guadalupe Posada were foundational toward influencing and inspiring their work. Although Posada and publisher Antonio Vanegas Arroyo rarely displayed work that was as overtly expressive as the artists of the TGP, they truly did inspire them and many others. In this image Leopoldo Méndez pays homage to Posada. He positions Posada, burin in hand, with a studious gaze out the workshop window where Rurales are at work. On the table Méndez shows us Posada’s engraving in reverse and in the background, the printshop workers look toward Posada with seeming anticipation if not admiration.
Posted by Director at 10:24 AM No comments: 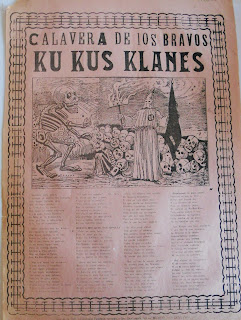 Two images were joined together to form one for this unflattering look at the Klu Klux Klan. The large calavera on the left was cut from the broadside entitled Gran Calavera Electrica, it is signed in the plate by Posada. The portion on the right with the klansman in the white sheet is an unsigned addition and likely not by Posada. Although the Klu Klux Klan formed in the US in the 1860s, its influence in Mexico has been noted beginning around 1915 and into the early 1920s. Additionally, the KKK were active in the southern US as well as San Diego during the 1920s where some records show evidence of its interaction with Mexicans coming to the US for work. This broadside was likely printed after Posada’s death in 1913, possibly by Blas Vanegas Arroyo in the 1920s, but its exact date is unknown. Regardless it shows the use of Posada’s artwork to make social commentary.
﻿
Posted by Director at 3:37 PM No comments: