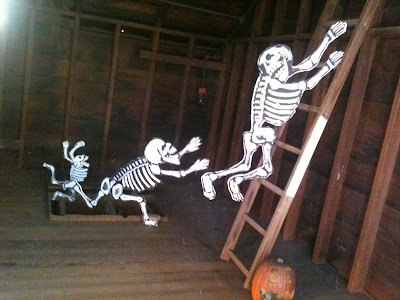 Posada's calaveras visited the Winchester Mystery House in San Jose, CA for their Dia de los Muertos observance. It was the first time for the Winchester to sponsor such an event. There was an altar and a variety of original images from the New World Prints Collection. Sarah Winchester might have found them disturbing as she believed that the spirits of the dead killed by the guns her husband created might come back to find her. Thanks to Posada's calavera images perhaps they did in some ways!
Posted by Director at 10:01 AM No comments: 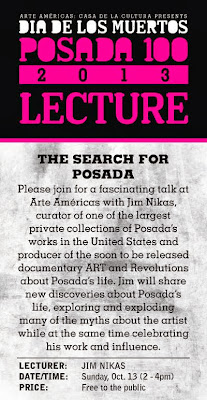 Lecture on Posada and an update on the documentary at ArteAmericas 1630 Van Ness, Fresno, CA. There is a current exhibition showing Posada's work and complimentary commemorative exhibition celebrating Posada's work with artwork from 32 artists from the Instituto Grafica of Chicago.
Posted by Director at 3:15 PM No comments: 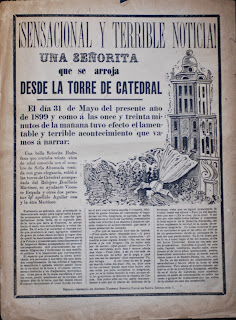 Posada's art has influenced many artists over the years. One was Frida Kahlo. The images shown here in this blog posting show striking similarities. Here is a partial quote from an interview of Frida conducted back in 1933.
"I had gone up to the Barbizon-Plaza hotel to interview Frida Kahlo, who was the wife of Diego Rivera, and a great painter herself, a sort of demonic surrealist. That was when Rivera was doing those Rockefeller Center murals. Thumb-tacked all along the walls of the hotel suite were some very odd engravings printed on the cheapest kind of newsprint. "Jose Guadalupe Posada," Kahlo said, almost reverentially. "Mexican. 1852-1913." She told me that she had put the pictures up herself so she could glance at them now and then and keep her sanity while living in New York City. Some were broadsides. "They show sensational happenings that took place in Mexico City--in streets and in markets and in churches and in bedrooms," Kahlo said, "and they were sold on the streets by peddlers for pennies." --from the book Up in the Old Hotel by Joseph Mitchell (1992). 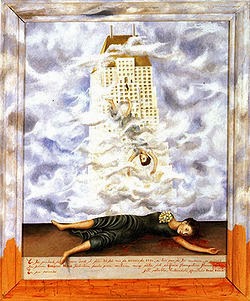 Perhaps some of the images by Posada of disasters and the demonic elements present in many of the sensational broadsides made an impression on Frida. If she was not already familiar with Posada's images, being married to Diego Rivera may have helped as he had just a few years earlier in 1930 authored the Foreword about Posada in the Monografia Posada published by Francis Toor.
Posted by Director at 3:04 PM No comments: 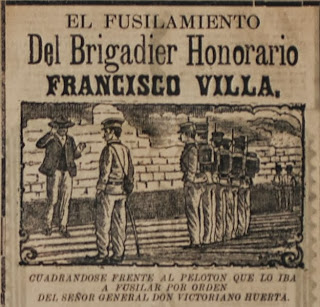 Posada sometimes used photographs as templates to create his illustrations. This allowed him a greater degree of control over the image. He could emphasize certain elements and also make the image more generic so it might be used over for a variety of stories that Vanegas Arroyo published. It also allowed his publisher the flexibility to see what news was current and then rehash it with its own artwork. In this example Pancho Villa is facing a firing squad. The image above left is from a halfsheet broadside published by Antonio Vanegas Arroyo. The image below is from the archives of the Hemeroteca Nacional in Mexico City, it is dated 1912, from the year before Posada's death. Note how efficiently Posada uses the space setting the image up in a way that draws the eye to Pancho Villa. In the photo there is a large amount of "useless" empty space to Villa's left. 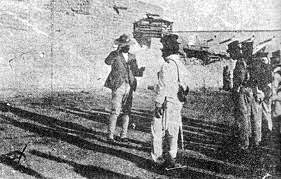 Filming on Location in Mexico 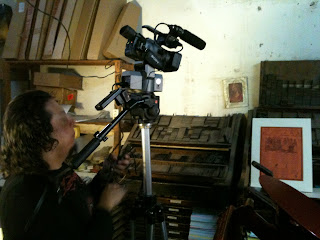 Documentary director, Victor Mancilla, is seen here checking the scene for our recreation of Posada's workshop. Note the printing plates and trays of lead type on the left. Still used today as the they were over one hundred years ago in the time of Posada.
Posted by Director at 11:39 AM No comments:

Searching for Posada: His Workshop on Calle Moneda


The image to the left is the way Posada's workshop looked about 1899. It is one of two photo images we have of the artist. Posada is on the right and it is generally agreed that the young man is Posada's son Juan Sabino Posada Vela who died in 1900. In our search for Posada we now believe that we know the identity of the third person in the photo. In the image below we see historians Agustín Sánchez González and Helia Emma Bonilla Reyna in front of the workshop as it is today. It is about three blocks from Mexico City's zocolo. 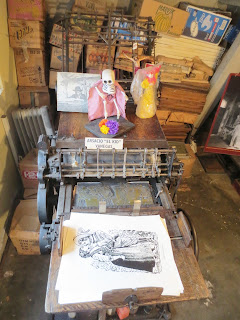 For the last week we have been filming in Mexico City, Leon and several sites within the state of Guanajuato, Mexico. In this photo we see one of the printing presses that beginning in 1880, produced thousands of images for the Vanegas Arroyo publishing house. Many were illustrated by José Guadalupe Posada. Until his death in 2001, Arsacio Vanegas Arroyo carried on the family tradition of printing. On top of the press is a little paper mache calavera dressed a luchador (wrestler) as Arsacio was also a well known combatant in lucha libre circles. It was that connection to lucha libre that helped result in Arsacio's support of the Cuban Revolution. In addition, to the left and behind the little calaverita is a photo of Constancio S. Suarez who wrote many of the stories and texts that Posada illustrated for Vanegas Arroyo.
Posted by Director at 2:18 PM No comments:

January 20, 2013 is the Centenario of José Guadalupe Posada's Death

His work with the burin was great
Thousands of images he did create,
Calaveras and politicos he sent with a din
With novenas and songs to sing
To el gran monton of bones
Giving all homes
Including himself from poor health.

It might be said that the events of history are the stones which we of the present use to shape the world in which we live. During the 1920s and 1930s, the famed Russian filmmaker Sergei Eisenstein discovered the images of José Guadalupe Posada who had passed away more than ten years earlier. At the time post-revolutionary Mexico was home to many Mexican artists and intellectuals—and also at least parttime to many ex-patriots including: Francis Toor, Jean Charlot, Upton Sinclair, Orson Welles, Katherine Anne Porter, Paul O'Higgins and Leon Trotsky—who were drawn to the sea change brought about by the upheavel resulting from the Mexican Revolution. Many cultural ideologies were challenged. Old was out and new thinking was called for in many areas of post revolutionary Mexico. During this time the renowned Soviet director Sergei Eisenstein came to Mexico to work on his film ¡Que Viva Mexico!

http://www.youtube.com/watch?feature=endscreen&v=bxTaFDYkigY&NR=1 Start watching at the Epilogo approximately 1:17:58.
Posted by Director at 8:21 PM No comments: