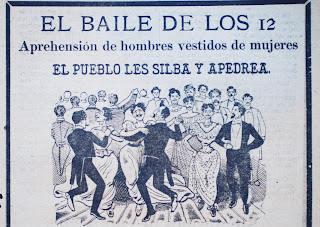 Posada and Vanegas Arroyo used this image of men dressed as women dancing with other men to illustrate two sensational stories on raids that took place apprehending 41 and later 12 (as illustrated here) men who were participating in a dance. In the case to the 41 story which was published in 1901, the number 41 began to be used when refering to homosexual or what would be called gay activities now days. It was meant to be derogatory. A person refered to or labelled with the 41 term was meant to be looked at in a negative way just as the terms "fag" or "queer" were used in the USA. The story not only reflects the bias of the times but also reports on the inequality of the period though commentary about the socially advantaged individuals who were able to buy their way out of being arrested and punishment.
Posted by Director at 7:03 AM