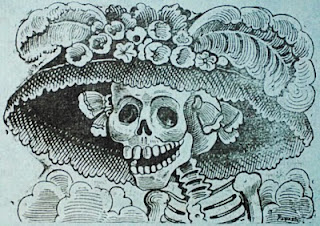 Posada created what is viewed by many as his most iconic image, La Calavera Catrina, during the last few years of his life. The New World Prints Collection contains several broadsides in which the image is used. The first use, although undated, appears to be in 1912. The name "catrina" refers to the feminine form of a catrin also known as a dandy. The calavera images of catrins or catrinas were used as reminders of our common mortality, that death is the great equalizer, no matter what. Muralist Diego Rivera later created (1947-48) a full length version of La Catrina in a fresco called A Dream of Sunday Afternoon in Alameda Park, which may be seen today in Mexico City.
Posted by Director at 9:32 AM