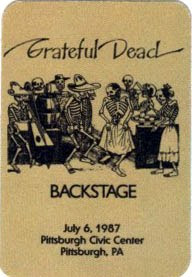 The Grateful Dead used this calavera image from Posada's lead engraving most popularly known as "El Gran Fandango" for a variety of concerts. Alton Kelly and Stanley Mouse are credited with design of the calavera wearing a garland of roses called "The Woodcut". It is said to have originated from European designs. Posada's calavera imagery fit right in and was readily available and so Posada images became a part or rock and roll history.